In the late 19th century the Wolverton Rugby Football Club (known then simply as the Wolverton Football Club, played several teams who would now be considered superior – Northampton Saints, Warwick, Coventry, St Thomas Hospital, London and one game only against Bedford.

Bedford’s football club in the 19th century played for some years under both codes. One week they played under Football Association rules and the next week using Rugby Union rules. This seems very quaint now and was recognised at the time as being unsustainable, so in 1882 the two codes parted company and set up separate teams. The rugby team named themselves Bedford Swifts and the club is still going today and plays in the East Midlands league. 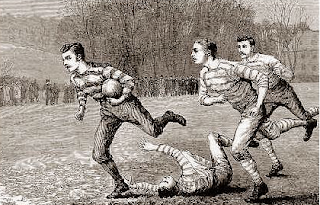 On November 28th 1885 Wolverton travelled to Bedford to play against the Swifts and the game ended in a rancorous draw, with ill feeling on both sides. Letters were written to Croydon’s Weekly Standard (later known as the Bucks Standard) and I reproduce them here to perhaps tell the story.

Sir – Having been questioned by several persons as to the reason the Bedford Football Club refuse to play the return match with our club, I should be obliged if you would allow me to inform those of your readers who take an interest in our club, the grounds on which this refusal is based.We journeyed to Bedford on the 28th ult. (November) to play our first match of the season with this club. When the teams faced each other, it was evident that the Wolverton team was at a great disadvantage, their opponents being much more strongly represented, yet the game, which at first appeared an easy win for the home team, resulted in a draw. During the first half-time Bedford obtained a try, and, in the second half, both teams played a fast game, but, about one minute before time was called, the Wolverton team, contrary to the expectation of their opponents, succeeded in obtaining a try. It was then that the Bedford captain, finding that their chance of victory was over, time being called, appeared terribly agitated, and objected to the try being obtained by Wolverton.I wish to state the facts as they occurred. The ball was run in, and the umpires appealed to. Both decided that the try was fairly obtained, but the Bedford captain, contrary to the rules of football, disputed the decision of both umpires. Last week I received a letter stating that, after what occurred, the Bedford Club would not meet to play the return match. I can only say that if members of this club are so lost to fair play, their refysal to meet again reflects discredit upon themselves only.On behalf of the Club,I remain yours faithfully,Alf. E. AbbottHon. Sec. Wolverton FC.Wolverton, December 17, 1885.

This letter appeared on December 28th. On January 9th 1886, Croydon’s Weekly Standard was able to publish this reply.

Sir—I was surprised to see in your last issue a letter from the hoin. sec. of the Wolverton Football Club alleging reasons for our discontinuing the connection wish his club.  As perhaps he may not be satisfied with an unqualified denial of those reasons, I may as well state our objections to again meeting his club are their ungentlemanly conduct and language, which were such as are expected only from the roughest of roughs, and which ought to be altogether foreign to the game of football. I am sorry to say that such notice was taken of it by the lookers on, that those who had not already left the field in disgust greeted the retirement of the Wolverton team with a storm of hooting. As to the remarks on the terrible agitation and unfairness or our captain, 1 can only say Mr. Abbott’s power of perception must be wonderfully keen, for no one has ever observed those qualities before, although the gentleman in question has been paying football for years. I am, Sir, yours faithfully, A. F. DUDLEY. Hon. Sec. Bedford Swifts Football Club40, Adelaide Square, Bedford. 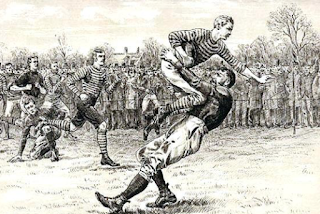 133 years later it is difficult to say who was at fault. Words were obviously spoken and not forgiven and relations were poisoned forever. Bedford, as far as I know, never played against Wolverton, although there have been games played between Bedford and Milton Keynes – so to that extent, the hatchet has been buried. This can be contrasted with Northampton Saints, whom Wolverton played several times at the end of the 19th century.  In the early years of the re-formation of the Wolverton Rugby Club, Northampton Saints were kind enough to send a team to Wolverton to help to promote the game. By that time the Saints were among the top clubs in the country (as indeed they are today) and relations remained cordial, although they had been competitive in the 1880s and 1890s.