On the 11th day of the 11th month representatives of the opposing forces met to agree to an armistice, which was signed at the 11th hour. So the four year war which had cost millions of lives came to a stalemate. There were losers, of course. The Austro-Hungarian Empire collapsed, as did the Turkish Empire. The German economy was crippled by the terms of the Treaty of Versailles, signed in 1919.

It is difficult to believe now that young men in 1914 were only too keen to sign up as volunteers. In August 1914 the recruiting sergeant was overwhelmed by applications to join up and he ran out of forms. The would-be recruits had to come back the following day.

And they weren’t always young men either. Beard, pictured below, was 35 when he signed up and my grandfather’s older brother, born in 1876, was in his late 30s when he joined up in 1914. Fortunately, he survived the four years and died in 1966, one week short of his 90th birthday. 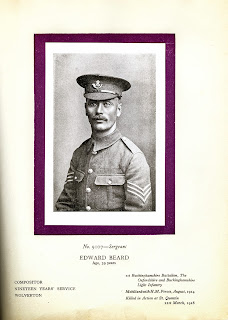 The armistice came just too late for some. On November 13th 1918, there was a memorial service at St George’s for three soldiers who had lost their lives in France on October 16th. they were private Alfred monk, Sergeant J. Forrester and Lance Corporal George Watts.