Was there an earlier Wolverton Express?

Some time back I wrote a piece about local newspapers and placed the first date of publication of the Wolverton Express in January 1901. The post is here.

However, I have discovered something today which may cause me to revise that view. The Oxfordshire Telegraph of 7 September 1887 features a brief column under the heading “The Wolverton Express.” Under that heading is written:

Further research revels similar entries in earlier years in the 1880s and, as far back as 1862, the Oxfordshire Telegraph was promoting itself as the Oxfordshire, Brackley and Winslow Telegraph, Wolverton Express, Stony Stratford and Newport Pagnell Advertiser.

The Oxfordshire Telegraph was a Bicester publication and in those relatively early days of local newspaper publishing probably wanted to cast its net as widely as possible. By 1880 it was known as the Oxfordhisre, Buckinghamshire and Northamptonshire Telegraph, Winslow Advertiser, Wolverton Express and Buckingham Liberal. The Wolverton Express part of the paper was usually a column.

The name Wolverton Express therefore pre-dates the independent newspaper by about 45 years.

Tilley’s Newspaper office on Station Road should probably be read as Stratford Road, and indeed appears as such in the trade directories of the period – Robert Tilley, Newsvendor. It is possible that he had one of the lock-up shops next to the Royal Engineer and that his business was taken over by Cornelius Muscutt, later known as Muscutt and Tompkins. 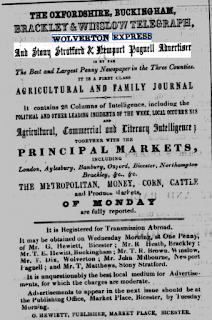