I am constantly surprised by what I don’t know about Wolverton and district. yesterday a friend told method there had once been a Prisoner of War camp in Haversham. Apparently t was opened in 1943 for Italian pows and later accommodated Germans. it closed in 1948 and one of the buildings served as a social centre for some years after that. 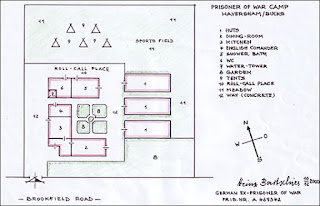 The camp was a low security camp and after the war was over the POW’s we’re probably men who had no home to go to and were accommodated were while they were being re-patriated. they had some freedom of movement. On 12 July 1947 the Wolverton Express reported:

‘P.O.W. were now allowed to ride on buses and to spend at local shops. On Saturday last many of the German P.O.W. stationed at Haversham Camp visited Wolverton and went to the ‘pictures’ and spent money in shops, and looked in at two dances. This added freedom to the relaxation recently announced Government restrictions. Haversham is a White Camp and there are 141 P.O.W. housed there. A White Camp indicates that all the men there are anti-Nazi, and about a third of them speak English. They have between 4/- and 4/6 a week to spend outside the camp, and the maximum allowed in their possession is 30/- ordinary rank and £3 officers.

The camp was located more-or-less where the Haversham estate was built. The main POW buildings were located where Chalmers Avenue is and there was a sports field between Rowan Drive and Keppel Avenue. The post war estate obliterated the camp except for the building which was retained as a social centre.

I can’t recall anyone talking about it when I was growing up, but there may be some, older than I, who have recollections. A full account can be found on the Haversham website. http://www.mkheritage.co.uk/hav/docs/camp/camp.html