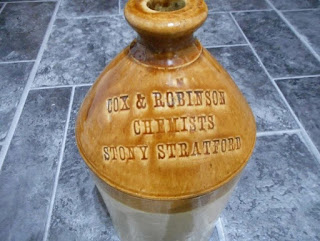 One of Stoy Stratford’s more venerable businesses is the chemists Cox and Robinson.

Charles Cox was born in Middlesex in 1828 and came to Stony Stratford to work as an assistant for Joseph Howe, and established chemist and druggist. Joseph House was born in 1814 in the village of Milton Keynes and he brought in his nephew, William Robinson, as an apprentice about 1852. Charles Cox married Julia Howe from Milton Keynes in 1854, another relative of the Howe family.

It is not clear what happened to Jospeh Howe. He may have retired early, or possibly he died at the relatively early age of 46. At any rate Charles Cox was able to take over the business with William Robinson as his assistant. Both now had family connections and the two men formed a partnership and the business was from this point known as Cox and Robinson. They appear in the trade directory of 1864 as such.

Charles Cox did not live long either, dying in his early forties. William Robinson now became the senior chemist and Charles’ widow, Julia, became a partner in the business. The Cox’s had no children.

William Robinson did live to a good age, dying on 20 March 1916. He married late and there were no children from this marriage either. Therefore, the business was bequeathed to his long time assistant James McLean, who kept the business name. So either Charles Cox nor William Robinson had family that they could pass the business to, so it is all the more surprising that the name of the business continue to this day.

Some years ago the business moved from its old premises on the High Street to its present location on the Market Square. 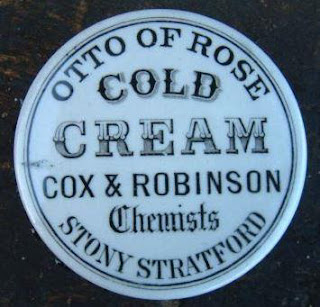 (I am indebted to Paul Cox for the use of these images. Paul has prepared a pamphlet about old merchants’ flagons and includes several Stony Stratford and Wolverton merchants. The link to his paper can be found here.)
1
Previous Post
Next Post

Birth of the Urban District Council