By Bryan Dunleavy on Saturday, December 9, 2017

On 18 October 1806 the manors of Calverton and Beachampton were up for sale at an auction at the Cock Hotel. The successful bidder was John James Perceval, 3rd earl of Egmont. Earls of Egnont and the name Perceval are quite obscure in history but for one event, the assassination of Spencer Perceval in 1812. 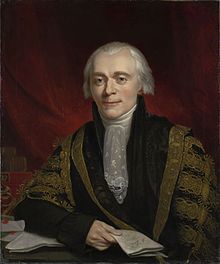 Spencer Perceval was a younger brother of the earl of Egmont and had entered into politics as the MP for Northampton. In fact, there is a statue of him in Northampton’s guildhall. He held several cabinet offices before becoming Prime Minister on 4 October 1809.

On 11 May 1812, Spencer Perceval entered the lobby of the House of Commons and a man stepped forward, pulled out a pistol, and shot him in the chest. Efforts were made to save him but he died within a few minutes. His assassin, who made no attempt to escape, was a man called John Bellingham. He was a merchant who had been thrown into prison during some dealings with Russia. He got it into his head that the British Government should compensate him, and as no recompense was forthcoming, nursed a grievance against the government, which was directed at the unfortunate Prime Minister.

Justice was swift. Only four days later, Bellingham was tried at the Old Bailey and sentenced to death by hanging. He was executed win May 18th.

Spencer Perceval remains the only Prime Minister in history to be assassinated. It was a freak circumstance and was unconnected to any policies he may have implemented. It was not even personal.

Birth of the Urban District Council