By Bryan Dunleavy on Saturday, December 9, 2017

The Wolverton Manor was 2,500 acres of mostly productive farm land and it always held a high value. Even in 1086 it was valued much higher than surrounding manors, such as Calverton, Loughton or Bradwell. Once the inn trade at Stony Stratford developed in the 13th century the manor became more complicated and of necessity needed to be managed. The medieval lords usually employed a man  called a Reeve to collect tithes from the peasants and deal with any disputes. Mostly, men of this early date would be nameless, but Sir Frank Markham suggested that a man called William Vis de Loup (Wolf Face) may have been a steward, because his name appears on so many 13th century deeds.

After enclosure in the 16th and 17th centuries the nature of land management changed and a newer type of professional was required. This was the land agent.

The first such man that we know of was Thomas Battison, who lived in the Northamptonshire village of Quinton, and had apparently served Sir Edward Longueville for a long time.In 1713, when Dr Radcliffe purchased the estate, Battison decided to retire and pass the handling of the estate to his son Jon. Dr. radcliffe approved the transition in the interests of continuity and John Battinson shepherded the affairs of Wolverton until 1740, when he was dismissed. Matters had been unsatisfactory for a number of years. Rents were either not collected or not recorded. Battison’s relations with one of the principal farm tenants, Richard Woodall, were far from cordial, and this presented another problem for the Trustees.

He was replaced by George Gill who held the job until he died in 1749. While he was never suspected of fraud like his predecessor, he nevertheless, was not altogether competent in keeping his accounts, which were discovered in a state of some confusion after his death. Money was owing to the Trustees, but there were insufficient funds to repay and they were forced to pursue Gill’s widow. This course of action proved fruitless and the Trustees themselves were required to dig into their own pockets to meet their legal obligations.

His successor, Jospeh Stephenson die on 18 August 1753, and had little time to make an impact.

Thomas Quartley was appointed to be the next land agent on 27 March 1754. He was already a land agent on another estate and he proved to be an experienced man who kept meticulous accounts. He served for just over a decade when he died at his home in Wicken on 21 December 1766.

His successor, Henry Smith from Bicester had a short tenure before he fell ill and died on 25 September 1772.

The Trustees next turned to another experienced land agent, Thomas Harrison, who was land agent for earl Spencer and land agent for the Paget family, who were earls of Uxbridge. He had been living at earl Spencer’s mansion at Stantonbury, but in 1773 this was becoming dilapidated and Harrison washable to moves family to Stony Stratford. 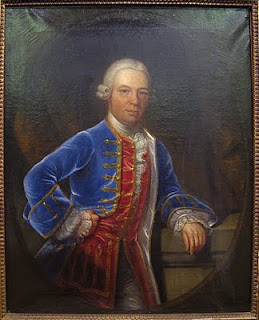 Harrison was an energetic man who had fingers in many pies in these years when the industrial revolution was beginning to gather pace. He had an interest in some iron works in Staffordshire, some canal building ventures and through his dealings with the copper mining rights in Anglesey on behalf of the earl of Uxbridge, seems to have made himself a small fortune of £20,000. On the proceeds of this venture he was able to build Wolverton ouse in the early 1780s for £1840 and make several property investments. He is known, for example, to have purchased The Bull and The Three Swans in Stony Stratford, and Bletchley Park.

Harrison was a moderniser. He reviewed (and increased) all the rents and began to rationalise the size of the farms, tending towards fewer and larger. When his son Richard died in 1858, the farm rental income was double what it had been in 1773.

Thomas Harrison died in 1809 and was succeeded by his second son Richard, who continued as lasagne until his own death in 1858. The Harrisons between them oversaw i
the introduction of the Grand Junction Canal in 1800 and the London and Birmingham Railway in 1838 – momentous years.

One month after the death of Richard Harrison, the Trustees turned to a professional surveyor, Charles Couchman. Couchman had an office in Birmingham and was a non-resident land agent, somewhat in the older tradition. The modern development and expansion of Wolverton and Stony Stratford clearly called for the modern skills that Counchman had. He served until his death on 8 August 1886. His replacement was Sidney Dugdale, the youngest son of one of the Trustees, William Dugdale. Sidneyfoilled the role competently, and apparently without incident until he died 29 September 1899.

The next land agent, John Willmott, held the job for the first 25 years of the 20th century and showed himself to be quite imaginative in developing the estate. At the beginning of the century Wolverton was again bursting at the seams and new land for housing would be required to the west of Windsor Street. Up to this point the Trust had always sold land to the railway company, who, in turn, developed it, either themselves or by sale of plots to builders. Willmott persuaded the Trustees that they should act as developers themselves and convinced them that the houses would be easy to sell and that they would profit greatly from this approach. This was indeed so. All of the western streets, named after the Trustees themselves, were developed and sold by the Trust, and all owners of these properties will find the name of the Trustees at the time on their original deeds.

Three other land agents succeeded Willmott, who resigned in September 1925. They were Lewis Matthews (1925-1938), Roger St John Matthews (1938-1956) and Robert Humbert (1956-1984). The announcement of the new town of Milton Keynes in 1967 essentially brought to and end the role of land agent in managing the Wolverton estate, a role which had been diminishing for much of the 20th century, and concluded when the manor was conveyed to the Milton keynes Development Corporation in September 1970.

The sale of Bletchley Park

Thomas Harrison and the Copper King