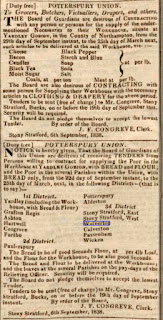 The Poor Law Act of 1834 created Poor law Unions and also the Workhouse. Up to that time the responsibility for administering to the poor rested with the Parish. The Poor Law Act grouped parishes into unions so that this business could be administered centrally. The workhouse was createdbecause early Victorians believed that people should work for whatever charity they received from the state. It became a hated institution by those who experienced its tough regime at firsthand.For reasons which are entirely down to the Duke of Grafton’s influence the union for part of North Bucks and South Northants was established at Potterspury and the workhouse was built at Yardkey Gobion.
The two advertisements here are from the Bucks Herald of September 8th 1838. Suppliers of bread, staple groceries, clothing and coal are invited to tender. I don’t imagine the Workhouse overseers were looking for the best quality or for the highest prices.