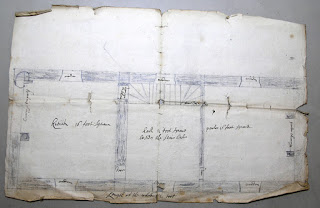 Despite Christopher Carter’s apparent neglect, which I wrote about yesterday, there was new building in the early years of the Radcliffe Trust’s tenure. Here is a plan for a new house to house Thomas Durrant and his family. From other documents I gather that Durrant was a sheep farmer who leased about 100 acres in “the sheep walks”, on the higher ground above Warren Farm. He also leased Nash Meadow “fore crop” on the north east edge of the manor and 18 acres of “meadow next the house” plus another 3 acres which included an orchard and Holme Close.

It is for this reason that I think this building must have been on the site where Wolverton House is now to be found. We know that Thomas Harrison built onto an existing building whenhe built his large house in the 1780s. It would be interesting to discover how much of the Durrant House (if any) forms part of the present Wolverton House.

The design of the house was a simple rectangle, “48 foot long at the front, 16 foot in width and 18 foot high above the ground.” It is not clear from this description if the height of 18 feet is to the top of the roof or to the eaves. I would guess the former, since the roof would have a high pitch to include space for sleeping quarters above. There were two partitions to provide for a 16 foot square kitchen, a 16 foot square hall in the middle and a 16 foot square parlour. Upstairs there might be an equal number of bedrooms.

Mr. Durrant was paying £91 a year to the Trust and was therefore one of the more prominent people living in Wolverton in those years. If this was middle class accommodation one can make a good guess at the living conditions of the labouring poor. 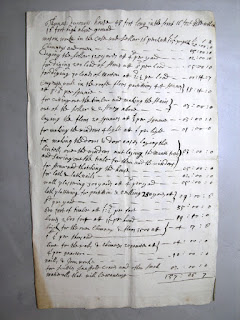 The estimated cost of this building was £157 6s 7d. To put this figure into perspective the vicar was only paid £30 a year, so the cost of the building was high. Timber, at 1/2d. per foot appears to be a high cost, presumably reflecting the labour of sawing everything by hand, and amounted to about 1/3rd of the total. “Nails and ironwork” adds up to £10 – another high cost. Bricks were used for the chimney and floor; they appear to be relatively cheap. The timber-framed walls were filled with lath and plaster and the roof was thatched.

If this was indeed the forerunner of Wolverton House it is perhaps no surprise that 60 years later Thomas Harrison wanted to build something better for his family. It cost him over £1800 – over ten times the cost of the Durrant House. 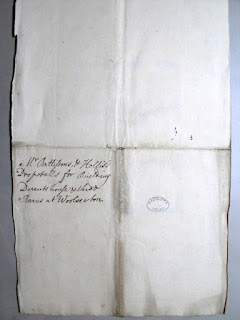