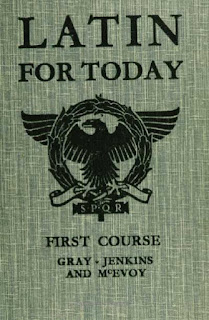 A former student at Wolverton Grammar School reminded me recently about Latin and its place in the curriculum. He didn’t do very well at it (few of us did) and fifty years later he still regarded it as a waste of his time.

Many would agree. It was a difficult sell even in the 1950s and various rationalizations were put forward –

it was a common European language

it would help with your vocabulary

you needed it if you were a doctor or chemist

you needed it to get into some universities and particular university courses.

The last arguments were the ones which may have had some resonance. Universities at that time required Latin for some courses and I think Oxbridge required it for university admission. The so-called Redbrick Universities were a little more relaxed about it.

Looking back (although I didn’t consider this at the time) Latin may have been quite new at WGS. I don’t see Latin appearing on my Mother’s School certificate from the 1930s so it certainly wasn’t general. Somehow, Latin must have been acquired by those who got scholarships to Oxford. I am not sure how this was done.  Miss Lidster, our Latin teacher, looked as if she had been there for some time but may have arrived after the war when Wolverton County School became a Grammar School. Latin for us began in the second year and continued to O Level. Miss Lidster was the only Latin teacher and taught up to and including 6th Form.

The difficulty we had with Latin was that it didn’t appear to relate to anything in our world. We had young open minds and could, for example, relate to learning the Periodic Table or Ohms Law. These things had some modern relevance, but the Latin we were taught was a language frozen in time. There were declensions to learn, verb conjugations and tenses, gerunds and gerundives. There were imperfect, perfect and pluperfect tenses. Nouns had different endings for the nominative, accusative, genitive, dative and ablative cases. It appeared to be a very complex way of organising a language. There was no common agreement on pronunciation after 2,000 years. Miss Lidster favoured the convention of pronouncing “v” as “w” and the “c” was always hard. Thus “victor ludorum” was pronounced wictor ludorum.

Of course English had travelled over the centuries by dropping inflexions. Words in English were at one time modified according to how they were used in a sentence, but over 2000 years the language had adapted to a more modern, more practical expression, where word order, rather than word ending established the meaning.

So this was the challenge, even to quite bright, receptive minds. We could have made sense of it, with effort, but without seeing the point, many of us remained unmotivated. Today, Latin is scarcely taught in schools anywhere.

Was it useful? If I see an inscription or phrase in Latin today I can more or less work out the meaning., At an academic level the knowledge is of some interest and I can tell the Latin roots of words used in the English language. I discovered once, when I was in Caracas, Venezuela, that I could read the newspaper in Spanish and make sense of it. But it hasn’t much entered my daily life. I would slot it in with quadratic equations, the use of logarithms and differential calculus – all of which I learned at school, but have never used since.

A History of the Moon Street School