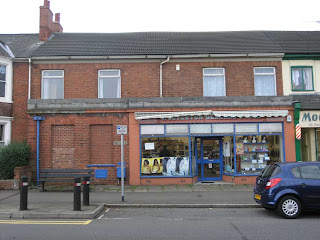 Originally there were two houses here, but as you can see very little survives. The chimneys have gone (and presumably the fireplaces) in favour of gas central heating, and the slate roofs have been replaced.
The house to the left was originally occupied by William Harvey and his family. Harvey is interesting because he was the Derbyshire man mentioned in Hugh Stowell Brown’s autobiography. (Hugh Stowell Brown worked at Wolverton between 1840 and 1843 as a youth and then went on to become a celebrated Liverpool preacher, and there is a statue of him in that city.) Harvey was one of his room mates at a cottage in Old Wolverton when they were both working for 6 shillings a week. Brown describes his time with Harvey and gives us a few insights into his character:

Four of us, Edward Hayes, William Harvey, William Mickle, and myself, drew together. They were journey men, but young, the oldest not more than twenty-five years. We agreed to lodge together with a peasant named Cox at Old Wolverton. Hayes was a little man, a clever, skilful workman ; he came from Manchester, and was great in phrenology, and in Combe’s ‘Constitution of Man.’ harvey was a Derbyshire man, one of the best workmen in the place, and gifted with a dry and pleasant humour. Mickle was a Scotchman, brought up in London; a boisterous but kindly fellow, whom Hayes pronounced to be a man in whom combativeness and self-esteem were abnormally developed. The four of us slept in two beds placed in one small room. We had our meals in the lower room of the cottage, which was the kitchen, and there was a small room, about eight feet square, which we converted into a study, and in which we tried in the evenings to improve our minds, which, sooth to say, sorely needed improvement. On Sundays, Hayes generally went out into the fields to meditate; Harvey went to the Methodist Chapel at Stratford; Mickle wandered from one place of worship to another; and I went to church somewhere in the neighbourhood, generally to Stratford, because there was an organ there, which, however, was very execrably played. Our studies were various. Hayes went in for philosophy; Harvey for theology; Mickle for mechanics ; I for mathematics. I don’t think we read a novel all the time we were together, and our whole stock of books was not worth £5.
William Harvey never advanced beyond his work as an engine fitter, but one must assume he was content with that. He was probably hard working and thifty. His daughter Mary became a school mistress.
The frontage and the later blocked up windows must date from the time early in the century when it was Lloyds Bank. The brickwork seems suspiciously like the brickwork of the later Lloyds Bank at 47 Stratford Road. Later this shop unit and Number 25 next door became the Electricity Board showrooms.
0
Previous Post
Next Post

Development along the Stratford Road

The Beginning of the Stratford Road