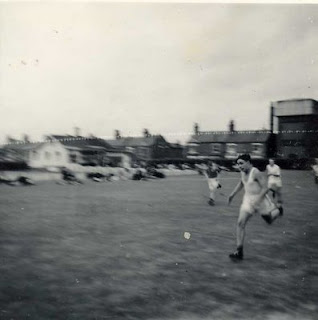 I came across this photo. It’s unremarkable (poor even) but it does show the water tower at the top of Osborne Street and the old cricket pavilion. The event is a sports day and is probably that of the Aylesbury Street Secondary Modern. I can’t think why I would be there and I may not have taken the photo.

There were two water towers – this one (now demolished) and a slightly bigger one which still stands on Green Lane at the other end of Osborne Street. I don’t know if it still in use for its original purpose of establishing a head of pressure for the town’s water supply. The space underneath the tower was used to store the Council’s street cleaning equipment.

The first water tanks were above the original engine shed. When the new water pumping station was built at the south end of Ledsam Street water was drawn from wells nearer to Bradwell Brook. This water tank was dismantled in 1890 and the building converted into a house for the schoolmaster.

There is a post on Wolverton’s early water problems here.